After winning her seat she became well-known nationally and many people were curious about her. The following article ran in Chicago’s The Day Book in early 1917.

A head survey of Miss Jeanette Rankin shows that her colleagues may expect tireless work, high devotion to cause, prudence, self control and probably sarcasm and lack of humor from the first woman to enter congress.

Her sharp, acid temperament indicates that she will see flaws everywhere and that she is apt to be decidedly critical.

Strength of character, self reliance, high ambition to excel in intellectual channels and an eagerness for the acquisition and diffusion of knowledge are all clearly indicated in the features.

Temperamentally she is a combination of motive-mental, each driving the other ceaselessly, hitting at poor health and an exhaustion of energies.

Leadership is hinted at in the long bridge of the nose, the trace of white under the iris bespeaks control of people and the prominence of the eyes, the command of language.

Her physiognomy destined her to a scope of influence and activity far above the provincial.

The long line of the jaw, indicating concentration on whatever she undertakes, in conjunction with other qualities above enumerated, suggests that Miss Rankin will be a conservative, studious, indefatigable worker for her ideals in public life.

Culture – blood – shows in all her lineaments, and alertness, like the mettle of the racehorse, is tokened by the soft, fine hair.

The straight, thin lips advertise firmness, self-control and business ability, all keyed to the intellectual by her dominating mental temperament.

Invariably, people whose features are keen-edged like Miss Rankin’s are incisive, critical, impatient of criticism and sarcastic.

The nose, showing prudence, thoughtfulness, alertness indicates that Miss Rankin will be a good parliamentarian in congress, that her work will be thorough and that she will not advocate a measure until it has been carefully analyzed.

Lack of the vital in her make-up, usually indicating a dearth of the friendly qualities, of good humor, of laughter and desire for more homely pleasures, would suggest austerity.

She would probably take a joke upon herself quite badly.

Summed up, the character indexes of Miss Rankin’s physiognomy, judged by her photograph, say she is essentially a teacher – serious, careful, untiring and whole-souled in her work, but too cautious and sensitive to be very original.

The image below ran above Minna Park’s analysis. 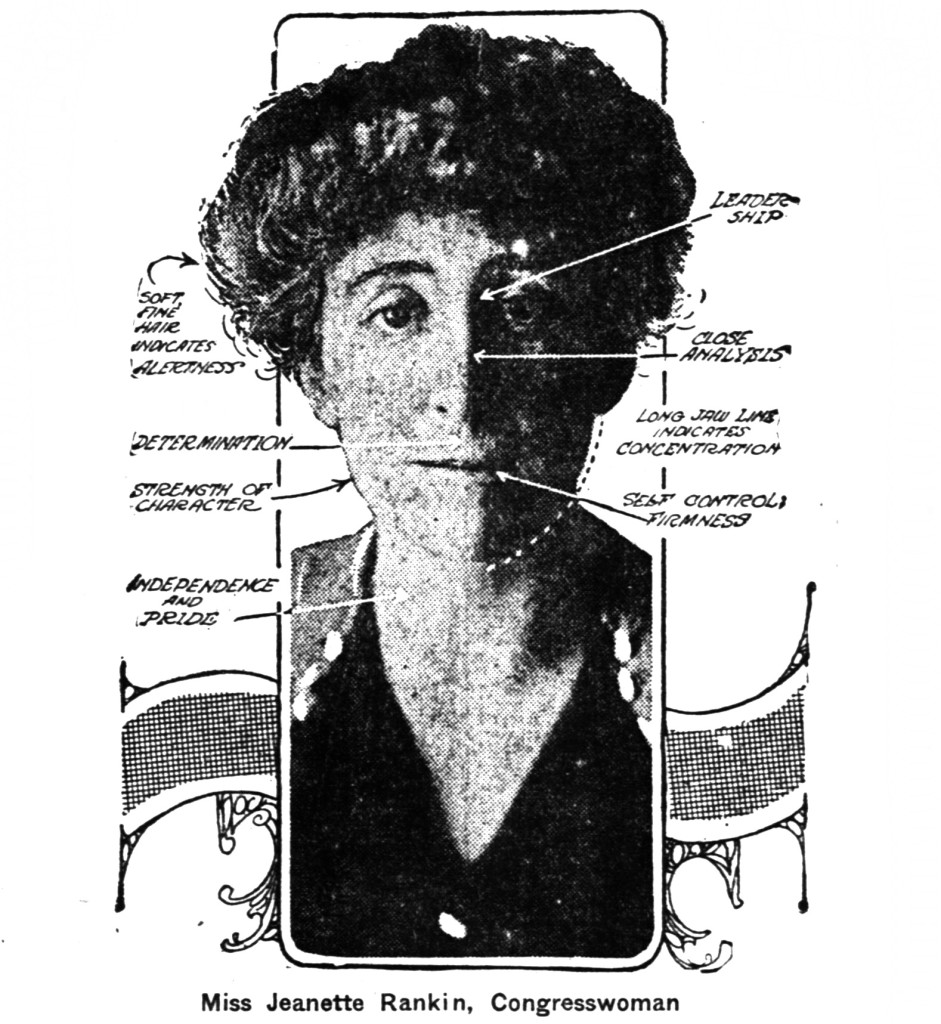