In spite of the some perceived negative aspects of her determination to be a martyr for the birth control movement, Sanger was a positive social force in testing and denouncing the Comstock law. The law, named for Anthony Comstock, a postal inspector who had lobbied Congress to forbid the distribution of obscene materials throughout the United States, equated birth control and sex education with obscenity.

She Tells Poor Folks How to Avoid Too Many Children
Husband Arrested for Circulating Her Works
Now She’s Coming From England to Save Him. 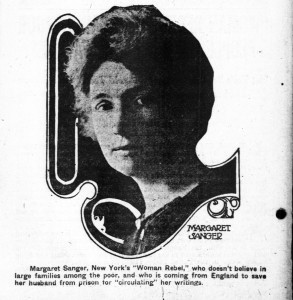 Margaret Sanger, New York’s “Woman Rebel,” who doesn’t believe in large families among the poor, and who is coming from England to save her husband from prison for “circulating” her writings.

Yet in this free country no single newspaper belonging to its free press has dared to tell the public about the case of William Sanger and his wife Margaret, who calls herself “The Woman Rebel.”

I am going to write it, and if it reaches you you will know that at least one paper in the United States is the possessor of its own soul.

To begin with, the Sangers are both of them lawbreakers as the law stands today in the United States, and you may approve of the law they broke and think perhaps that they should be punished.

But if you are a husband and have a wife you love or if you are a woman who cares for her husband your whole being will protest against the bringing of a fugitive from justice back within the jurisdiction of the law by torture of the loved one left behind. And that is what the state of New York has undertaken to do to Margaret Sanger by her arrest and threatened imprisonment of her husband.

And that is what it nas succeeded in doing? For Margaret Sanger tortured by her husband’s arrest as the result of her lawbreaking, is coming back from England.

Margaret Sanger is a highly intelligent woman, a trained nurse, who three years ago made up her mind that the greatest of all evils of poverty is the unlimited family. Last year she founded a paper called “The Woman Rebel,” in which she told of the formation of a birth-control league and offered to those who wanted such information a leaflet called “Family Limitation.”

I saw the four issues of this paper before it was suppressed I have seen the pamphlet, “Family Limitation,” of which 100,000 had been circulated in this country. The pamphlet contained such information regarding birth control as nearly every family physician dispenses to his women patients. Margaret Sanger says that she undertook to place such information already surreptitiously at the
disposal of everybody with the price before the poor, who she thinks have the greatest need of it.

And she maintains that her arrest, and her husband’s arrest, whatever their legal aspect, is actually just the working out of the double standard of law in this country one law for the rich and another law for the poor.

Margret had her own flaws that stand out from our 21st century perspective. The very positions used by some to condemn her now were actually widely held during the time between the two World Wars when she espoused them so it helps to see them in the context of the times.

In “The Morality of Birth Control,” a 1921 speech, she divided society into three distinct groups

Sanger concluded “there is no doubt in the minds of all thinking people that the procreation of this group should be stopped.” Although Sanger supported negative eugenics — the aim to improve human hereditary traits through social intervention by reducing the reproduction of those who were considered unfit — she asserted that eugenics alone was not sufficient, and that birth control was essential to achieve her goals

Sanger also supported restrictive immigration policies. In “A Plan for Peace”, a 1932 essay, she proposed a congressional department to address population problems. She also recommended that immigration exclude those “whose condition is known to be detrimental to the stamina of the race,” and that sterilization and segregation be applied to those with incurable, hereditary disabilities

Margaret Sanger and Son in Japan

Banned in Boston: The Silent Speech of Margaret Sanger

In address below, Cecile Richards reflects on the silencing of Margaret Sanger and the era that gave us the phrase, “Banned in Boston.” “You all know that I have been gagged. I have been suppressed. I have been arrested numerous times. I have been hauled off to jail. Yet every time, more people have listened to me, more have protested, more have lifted their own voices.” Thus read Arthur Schlesinger, Sr. in 1929 as Margaret Sanger sat silent beside him on the stage of Ford Hall, banned under court injunction from speaking herself.