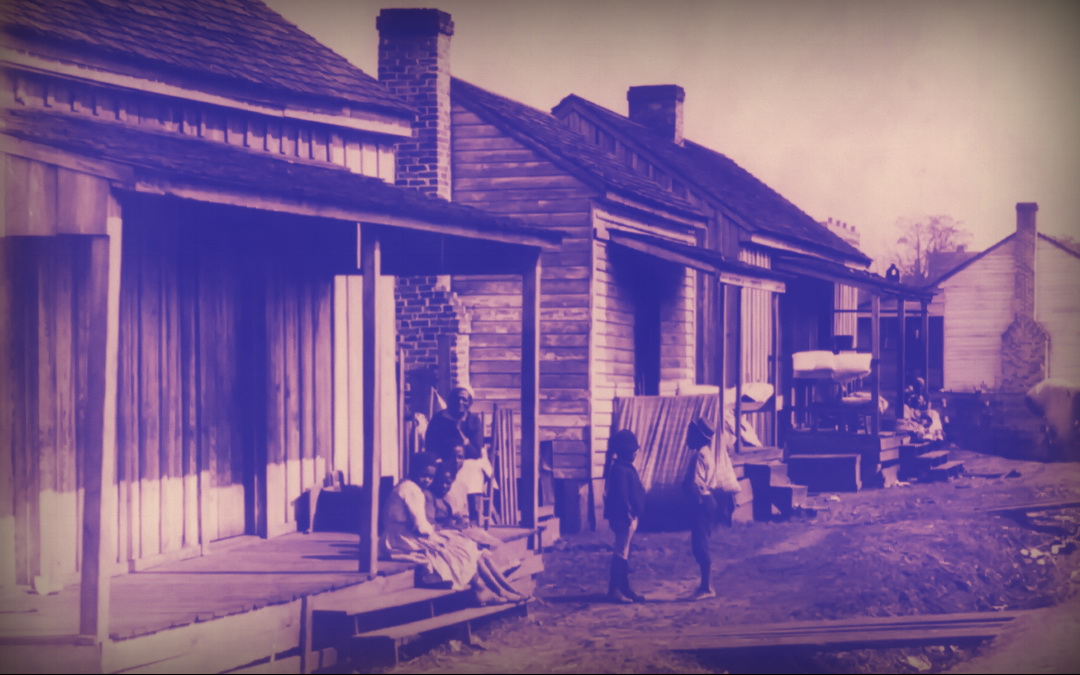 I was flipping through articles in the Frank Leslie’s Weekly collection over at Accessible Archives and I spotted this promotion for an upcoming issue:

WHY THE NEGRO IS ALWAYS IN DEBT. There is a reason why the colored man can never quite catch up with the world. The harder he works the deeper in debt he becomes; but this is not altogether his fault. He is being held to them by cold schemers who take the unfairest advantage of him. How much do you think they charge him for a dining table if he buys it on installments? The article, “How the Colored Brother in the South is Divorced from his Coin” by J. R. Hornaday, will tell you.

I decided I needed to track it down and read it.  The actual article with illustrations by “Zim” is quite long so the version below is abridged.   The J.R. Hornaday’s full article appeared in the January 23, 1913 issue.

How the Colored Brethren Are Fleeced 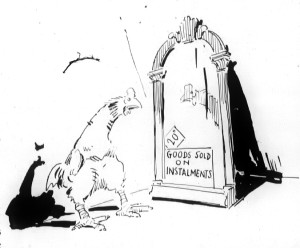 After describing at length the beauties and advantages–mostly imaginary–of the “magnificent new suburb for colored citizens,” the agent said:

“Now this lot here,” pointing to a large and gaudy map, “which fronts on Washington Avenue between Lincoln and Grant Streets, will cost you only $10 down and $10 per month.”

“How long you goin’ to give me to pay for it?” asked the dusky customer.

“Eighty months,” replied the agent, speaking lightly, as if the time could have no possible bearing upon the transaction.

“Tell you what I’ll do,” said the negro, “I’ll buy the lot if you’ll give me ninety months.”

“Sure,” replied the obliging agent, “anything to please a customer,” and thereupon the deed was executed, “payable ten dollars a month for ninety months .”

This hundred dollars extra which the land agent secured through the ignorance of his customer, comes under the head of what is known in the South as “Easy Picking,” a term which might be aptly applied to the purchaser of a gold brick or to one who parts with real money for a valise full of money that “can’t be told from the real.” 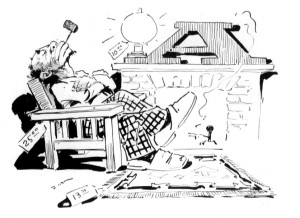 The incident is here recited for the purpose of illustrating the point that the negro as a rule has little skill in matters relating to business and is easily victimized. This fact, known for years in the South, has led to the organization of numerous schemes designed to keep the pockets of the recently liberated race empty.

Practically everything the negro buys, outside of his provisions, is purchased on the installment plan, and doubtless the food he eats would be bought on the same basis–and at a greatly increased price–if the resourceful installment man could figure out some method for recovering the goods in the event of failure to pay.

One cannot travel through the South, and keep an eye upon the negro, without being impressed with the extraordinary contrast between his surroundings and the interior furnishings of his home. Frequently this home consists of only one miserable little room, but in one corner a big, polished mirror, on a handsome dresser, reflects the dinginess of the opposite wall, while a polished oak bed looks oddly out of place in another corner. “Parlor chairs” are also crowded about the room and a large lamp, with gaudy red globe, is perched upon an oak table in front of the only window. Even the dirty floor contains a rug or two and the walls bear several gay pictures, encased by gaudy frames. To the uninitiated this odd combination might suggest ample means, combined with peculiarity of temperament, but to those who know, it merely proves that the unfortunate negro is in the grasp of the installment man and that for these gaudy and unnecessary trappings he has become a peon.

Sometimes the negro thinks to ask how many weeks it will take to pay for it, but at other times this consideration is lost sight of entirely. If the sale is made, the customer pays the dollar, which about covers the cost of the lamp, and signs what is called a “lease note,” which leaves the title of the property vested in the installment man until the last cent has been paid.

Perhaps it is a suit of furniture that catches the fancy of the negro. If the deal is closed, the customer pays down about twenty per cent. of the purchase price and agrees to pay the remainder in weekly installments of from five to ten per cent. The price charged for furniture sold under these conditions is enormous, and, in a great many cases, the negro, after paying for weeks, or perhaps months, grows weary of the grind, or through loss of position is no longer able to pay, and the furniture is taken from him. He may have paid considerably more than the furniture was actually worth, but there is nothing coming to him, the money paid simply covering the cost of the “lease.”

Furniture so taken back is polished up by the installment man and sold again. Cases are on record where the same suit has been sold over and over again and wherein the dealer has realized the original price many times over.

In some communities there exists what might be termed a partnership between certain minions of the law and the money lender. In fact, nearly every “loan shark” has his favorite Justice of the Peace, in whose court all legal actions are brought. The volume of business is very large in many instances and if the Justice of the Peace is that kind of man, he soon learns which side of his bread contains the butter, and he acts accordingly. The officers of the court are also frequently in league with the money lenders and under the circumstances, the unfortunate victim of the loan system has little chance to escape the payment of all that the “loan shark,” the Justice of the Peace and the court officials are able to pile on in the way of interest and cost.

It is not to be understood that all Justices of the Peace in the South are corrupt. Some are honorable men, skilled in the law and exact in its administration, but many are basely corrupt, using the office for their own financial betterment in defiance of right, justice and equity. The system upon which these courts, which might aptly be termed the buccaneers of the judicial system, is founded, is rotten to the core.

To these corrupt courts of inferior jurisdiction is due the existence of peonage in some of the remote sections of the South. The courts, in league with mill owners, lumbermen or other large employers of labor, impose heavy fines for trivial offenses and, in default of payment, the prisoner is given a term which lands him in a convict camp from which escape is practically impossible, even after his term has expired, as fresh crimes have either been found or trumped up and the unfortunate is given another sentence, and perhaps another and another.

This condition, happily, has also been given much attention within the past year or two and, while there is no doubt that peonage exists in the South to a certain extent, it is gradually being eliminated. The Federal courts have been especially active in going after this class of offenders.