Central Park receives about 35 million visitors annually, making it the most visited urban park in the United States. It is also one of the most frequently filmed locations in the world. 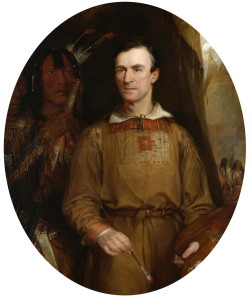 Not long after the park was established, various people and organizations vied for space in the park for exhibition or commercial purposes. The park attracted visitors from all over the city and the world and many people were eager to feed them and educate them.

One proposal that never went anywhere was described in the March 2, 1872 issue of Frank Leslie’s Weekly. George Catlin, an American author, traveler and painter, suggested that the Park Commissioners erect a sheet-iron teepee/wigwam type structure on a picturesque site, and buy all of the materials created and accumulated in his forty years spent among the Indians of North and South America, for both preservation and educational/display purposed.

Catlin said that if the Park would purchase the pictures and erect the wigwam, he’d personally decorate the exterior for free and spend the rest of his life explaining the collection and aboriginal existence to the visitors.

I cannot find anything about why, but the proposal was not accepted and the structure was never built despite the glowing endorsement by the paper as shown below.

It is certainly pleasant to New Yorkers, no less than the public in general, to be assured that with every succeeding year new attractions are to appear in our beautiful Central Park. Statues bear witness that the great men of other nations and times are not forgotten by the generous-hearted of to-day. The Paleontological Museum, if ever completed, will show us the proportions and outlines of animals existing long ages ago, while in the departments of living flowers, birds and animals, the various countries of the world will have fair representation. And better to the American student than all, there is a probability of the perpetuation of a symbol of aboriginal life, that will be the most unique curiosity about these famous pleasure-grounds.

Mr. George Catlin, the well-known Indian author, traveler and painter, proposes that the Commissioners of the Park erect a sheet-iron tent on a picturesque site, and purchase the results of his forty years’ life among the Indians of North and South America, for preservation and display therein. His paintings are six hundred in number, and illustrate fully the games, costumes, religious ceremonies and other customs of the race that is being too slowly exterminated. 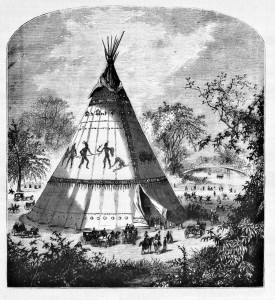 The Wigwam as Proposed

The tent will be fashioned after a Crow wigwam, brought from the base of the Rocky Mountains by himself. The structure will be seventy-five feet in height, with a base diameter of the same extent The upper portion being entirely waterproof, will be painted red. while the greater part of the body or centre will be of pale yellow, exhibiting the characteristic scenes in Indian life, such as buffalo-hunting, dancing and scalping parties. Beneath this will be a broad band of scalp-locks and porcupine quills. This, as well as an upper and lower band, will be painted red, and furnished with circular windows of ground glass, so colored that their object will not be discovered from without.

In the centre of the space covered by the wigwam will be placed the original Indian dwelling, while between it and the wall will be two circles of frames intended to support the interesting pictures. Above this will be an arrangement of gauze curtains and flies, by which an even degree of light will be cast on each tier and row of paintings.

If the Commissioners will purchase the pictures and erect the wigwam, Mr. Catlin will personally decorate the exterior without charge, and, if permitted, spend the remainder of an eventful life in explaining these striking reminiscences of aboriginal existence. No more appropriate structure could be erected in the Park.

If the Commissioners do not feel at liberty to purchase the collection, we earnestly suggest that our liberal citizens will club together, and secure these strictly American works.