This film,  Tomorrow’s Children, from 1934 offers some insight into the state of affairs here in the land of the free in the decade before the war. 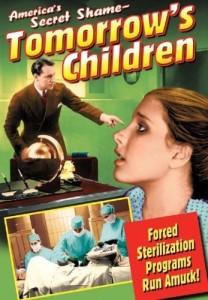 A young woman wishes to marry her boyfriend and raise a family, but because her own family has been deemed “defective” by the state health authorities–her parents are lazy alcoholics who continue to have children, and her brothers are crippled, have mental problems or are jailed–she is ordered by a court to undergo sterilization so that her family’s “defective genes” won’t be passed on to any more children.

Her boyfriend and a kindly priest desperately search for a way to stop the forced sterilization before it’s too late.