These are some examples of propaganda from the 1860s that were meant to scare the hell out of Northerners who were still on the fence regarding abolition and equal rights for all Americans regardless of race.

The second in a series of anti-Lincoln satires by Bromley & Co. This number was deposited for copyright on July 1, 1864.

The artist conjures up a ludicrous vision of the supposed consequences of racial equality in America in this attack on the Republican espousal of equal rights. The scene takes place in a park-like setting with a fountain in the shape of a boy on a dolphin and a large bridge in the background. 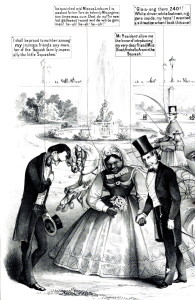 To the right a white woman embraces a black dandy, saying, “Oh! You dear creature. I am so agitated! Go and ask Pa.” He replies, “Lubly Julia Anna, name de day, when Brodder Beecher [abolitionist clergyman Henry Ward Beecher] shall make us one!” 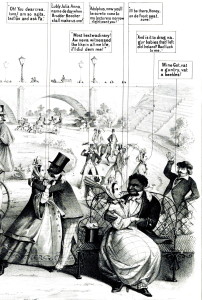 At the far right a second white woman sits on the lap of a plump black man reminding him, “Adolphus, now you’ll be sure to come to my lecture tomorrow night, wont you?” He assures her, “Ill be there Honey, on de front seat, sure!”

A German onlooker (far right) remarks, “Mine Got. vat a guntry, vat a beebles!”

A well-dressed man with a monocle exclaims, “Most hextwadinary! Aw neva witnessed the like in all me life, if I did dem me!”

An Irishwoman pulls a carriage holding a black baby and complains, “And is it to drag naggur babies that I left old Ireland? Bad luck to me.”

In the center a Negro family rides in a carriage driven by a white man with two white footmen. The father lifts his hat and says, “Phillis de-ah dars Sumner. We must not cut him if he is walking.” 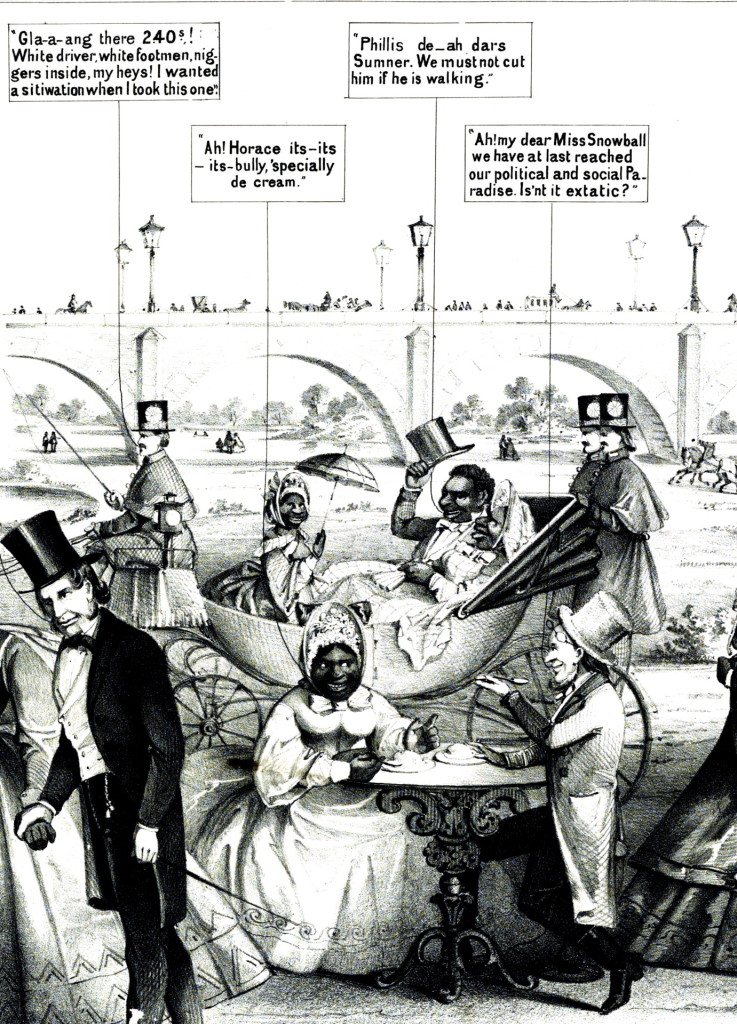 Their driver comments, “Gla-a-ang there 240s! White driver, white footmen, niggers inside, my heys! I wanted a sitiwation when I took this one.”

No. 4, The miscegenation ball

Although slightly different in format, this appears to be the fourth in the Bromley series of anti-Republican satires. As in no. 2 of the series, “Miscegenation or the Millenium of Abolitionism,”  the artist plays on Northern fears of racial intermingling. 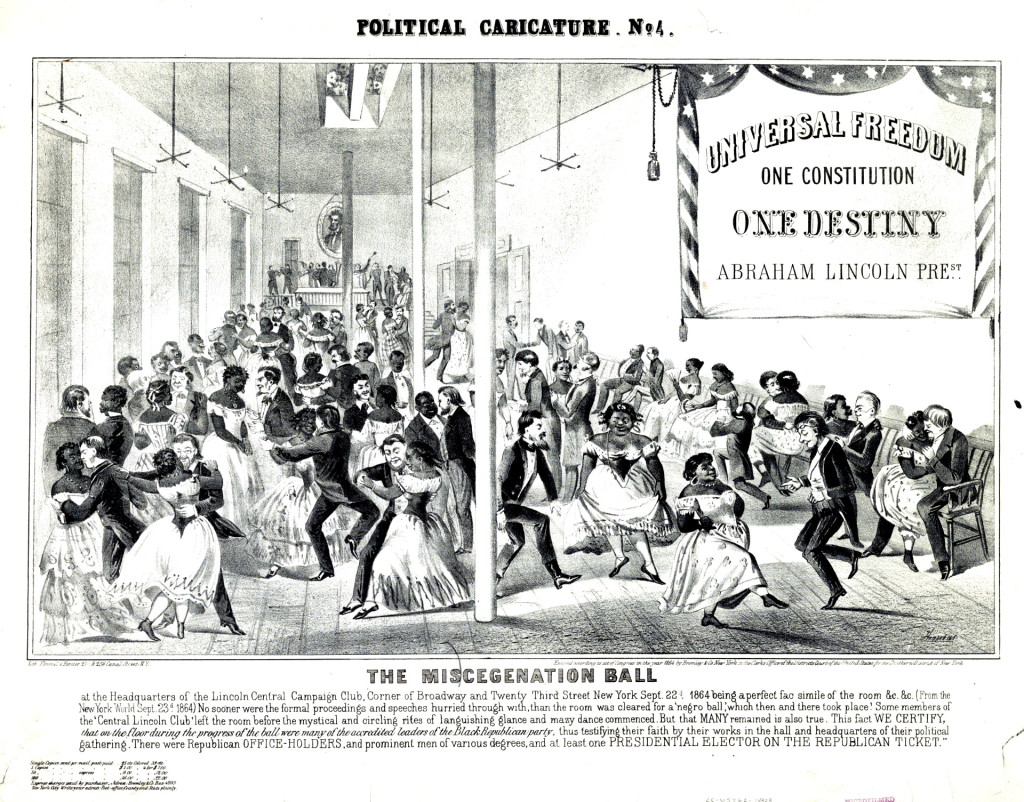 Here, white men are dancing and flirting with black women in a large hall. Above the musicians’ stage hangs a portrait of Abraham Lincoln. At right hangs a banner “Universal Freedom, One Constitution, One Destiny. Abraham Lincoln Prest.”

The text below further describes the scene:

The Miscegenation Ball at the Headquarters of the Lincoln Central Campaign Club, Corner of Broadway and Twenty Third Street New York Sept. 22d. 1864 being a perfect fac simile of the room etc… (From the New York World Sept. 23d. 1864). No sooner were the formal proceedings and speeches hurried through with, than the room was cleared for a “negro ball,” which then and there took place! Some members of the “Central Lincoln Club” left the room before the mystical and circling rites of languishing glance and mazy dance commenced. But that Many remained is also true. This fact We Certify, “that on the floor during the progress of the ball were many of the accredited leaders of the Black Republican party, thus testifying their faith by works in the hall and headquarters of their political gathering. There were Republican Office-Holders, and prominent men of various degrees, and at least one Presidential Elector On The Republican Ticket.