Of course it was about slavery

There has been a major resurgence in pro-Confederacy rhetoric on social media lately. The public’s increased awareness of the fact that a white supremacy based sub-culture is alive and well in America has produced a backlash against the symbols of the Confederacy that dot the Southern United States.

Heritage not Hate has become a rallying cry that completely misses the point. Honoring your individual ancestors is a personal matter. Using public lands and money to celebrate their rebellion and what it represented is an entirely different matter.

If the Confederacy was built on a foundation of love, it was a love for the status quo at a time when men and women could be property and the wealth resulting from the use of their minds and bodies could be collected by the people enslaving them.

The various states that attempted to secede from the Union each individually codified and publicized their reasons for forming a new nation and a major theme that ran across most of them was the passionate desire to keep the institution of slavery safe from limits that might be imposed by the newly elected Republican President and keep the institution growing into new lands to the west. (see: The Declaration of Causes of Seceding States)

There are other reasons that states and individuals supported secession but those were in addition to the preservation of slavery, not instead of it.

Some of the people in charge of elementary and high school history curriculum have done a great disservice to the nation. For almost a century now we have worked hard to insulate students from the harsh realities of nineteenth century America. As a result, we now have adults walking around who think that the causes for the war are unknown and only exist in a murky realm of debatable  opinion. We know the facts, but the facts are rarely presented clearly alongside the supporting documentation that removes a lot of that murkiness.

The same Internet that helps draw these pro-Confederacy activists together provide easy access to primary source materials that let us fully understand what has happening before and during the war if we just open our eyes.

The letter below appeared in The Southern Planter. The Southern Planter was established in Richmond, Virginia in 1841. It was an influential agricultural journal in the years preceding the Civil War. The letter below appeared in it and it sheds a lot of light on the arguments in favor of slavery while shooting down anti-slavery positions without any concern for the enslaved people at the heart of the matter.

For the Southern Planter. 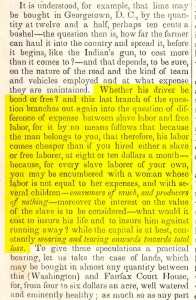 Counterpoint – This appeared in the same magazine. The author describes the problem of slaves not earning their keep and “wear and tear” on this human property. The arguments against slavery have nothing to do with a moral objection to owning people.

With your permission I will resume my observations upon the subject of slave labor. I have endeavored to show that it is in general the cheapest labor that this country affords, both because of its effectiveness, arising from subordination and continuance, and also because its price is victuals and clothes of the cheapest kind. I have said that labor obtained for mere food and clothing was the cheapest that could be afforded in any country. Hence unless there is labor in Europe (which it is not to be doubted there is) worse fed and clothed than our Negroes, we have the cheapest labor in the world: certainly none can be afforded in our own country at so low a rate. This is true in the general, but is very dependent upon the management of those who have charge of this particular species of labor. It is always to be fed, and must be always at work. This a good manager will effect. The advocate of white labor contends that the farmer only wants labor occasionally, and that the expense of supporting the slave when he is not at work more than compensates for the additional price of white labor. This argument points out most strongly the manner in which alone it can be refuted, viz. to provide work for every day in the year. A good manager will take care that no hand on his farm eats the bread of idleness for a single day, and if our farmers would only calculate upon each rainy day the clear loss upon the hands not at work, such contingencies would be more generally provided for. A little system will readily obviate this difficulty.

Good management consists not only in providing work for your laborers but in the manner in which the laborers themselves are controlled. Upon this important point, there is much error arising, either from ignorance or want of system. Negroes are like any other ignorant men in a state of subordination: they require to be managed with kindness, tempered with the greatest firmness. The most exact discipline is as necessary as in a school or on board a ship. Too much attention cannot be paid to their necessities, and the humane master will find a thousand opportunities of exhibiting the kindness of his disposition to his slaves. But his orders, which should not be variable, must be obeyed, or punishment must follow. With a strict observance of this rule, punishment will soon be unnecessary, because there will be no disobedience. Under such a system, the Negro is the most cheerful, grateful, and faithful laborer upon the face of the earth. It may be argued that few men are calculated to command and control others, to the greatest advantage. This is true; it is no common quality, but one extremely valuable to the southern cultivator, and where it is not possessed by nature, it is often obtained by study and practice. System, order, and management are every thing upon one of our large landed estates, and call forth, in their exercise, no ordinary powers of mind.

I would by all means advise our farmers to eschew hired labor, under our system. The habit of permitting the hireling, at the end of the year, to choose his own home, leads to a change of labor, that renders a slave at least twice as valuable to his master as to an individual hiring him. Besides the change of masters, from the subjection to a variety of systems, renders the slave unfixed in any; moreover, the pride of ownership on the part of the slave (a southern man will understand what I mean) is lost, and the power of changing his place gives him a degree of independence incompatible with necessary subordination. I once heard a very learned gentleman, who had very little experience, descanting very eloquently upon the difference between white and slave labor. I asked him whether, in speaking of slave labor, he alluded to hired slaves, or such as were owned by the operator. He replied that he had never heard of such a distinction, and did not know there was any difference. Although I did not tell him so, his reply satisfied me that he had very little practical information upon the subject on which he was talking so learnedly.

I conclude by asserting that under the control of good and judicious men, the southern master and slave should neither desire to exchange situations with any other similar classes upon the face of the earth.