We copy from that spicy little paper, The New South, published at Port Royal, by Postmaster Sears, a lively account of the affair:

The games inside the fort commenced with the foot race, which was watched with great interest and the fortunate victors rewarded with the several prizes and enthusiastic applause. Next in order came the hurdle sack race, which created intense merriment. Half-a-dozen competitors were tied in sacks with nothing but the head visible, and with their pedal extremities thus trammelled, they were required to run a race and jump over two hurdles. The absurd method of locomotion and the utter helplessness of those who were so unfortunate as to lose their balance and tumble over, elicited shouts of laughter.

The wheelbarrow feat also resulted in very laughable blunders. The competitors for the prize were all blindfolded and placed directly in a line with a certain point, the one coming nearest to the goal being the victor. The fun of the affair consisted in their deviation at every imaginary angle from a straight line, soberly trotting along with the barrows, under the pleasing impression that they were making straight for the goal—of course the man that was farthest away was greeted with shouts of derisive applause, and incited to further efforts by assurances of victory. 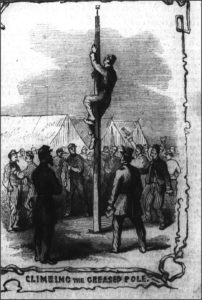 The meal feat was perhaps the most ludicrous feature of the whole. The hands of the negroes competing for the prize were tied behind them and they were required to take a five dollar gold piece from a tub of meal with the mouth. The ludicrous appearance of the contraband’s head, when it emerged from the meal tub, can be more easily imagined than described. They were very earnest in their search, and it was amusing to see the anxious looks of those standing by, lest the one with his head buried in the meal should be successful and they cheated of their turn. The third one succeeded in obtaining the prize, and was so elated with his success that he was led into a saltatory manifestation of the exuberance of his joy, and he capered round the tub of meal in real George Christy style.

The Burlesque Dress Parade, which was got up entirely by the privates and carried out exceedingly well, was a good termination to the comic features of the programme. The uniforms were grotesque in the extreme while the orders and manœuvres of the battalion were both original and ridiculous. 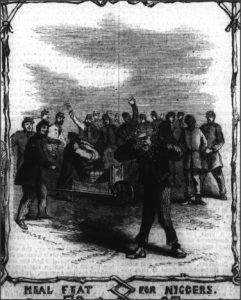 The occasion was taken advantage of by the men to make some good-natured hits at the officers in the general orders, which, notwithstanding their local character, seemed to be caught and appreciated by all. The games went off with eclat, and afforded a great deal of amusement.

A bountiful lunch was provided and partaken of by all during their progress. Gens. Brannau and Terry both left early in the evening, and with them many officers and several ladies, still there were many left who incoherently expressed a determination to see it out and “not go home till morning, till daylight did appear.”

We have to thank Col. Barton, 48th N. Y. V. (Commander of Fort Pulaski), and the officers of that splendid regiment, as well as Capt. Gould, of R. I. Artillery, for many courtesies to our Artist, who well observes, “A true soldier is ever a gentleman.”