TWENTY-FOUR hours after the dedication of the Woman’s Parliament in Washington a representative of THE LADIES’ HOME JOURNAL asked me what I really meant when I said that henceforth women are to be dictators. She was the fortieth or fiftieth person who had put the same question to me in that very limited space of time.

I meant then, and mean now, exactly what I said.

The end of the dictatorship of the world by men alone is in sight. We women have lived long enough in the cramped confines of a misfit social structure. We have been forced to sit still too long. We have been powerless for such an endless time that we have accumulated enough stored-up energy to shape any structure to our will.

We know we can manage the house. We can reconstruct it. We can put on a left wing and a right wing. We can add a sun porch to let in the light. We could even tear the house down if we liked-and I think men know that too.

The time has come to take this world muddle that men have created and strive to turn it into an ordered, peaceful, happy abiding place for humanity. In its present condition, the world is its own worst indictment against the sole dictatorship of men. Men have always obstructed and suppressed the intellect of one-half of the human race. They have always worked for themselves. That is not sufficient. The error lies here.

By excluding women men have interfered for too long with the development, interests, and intelligence of humanity. Men have always kept women in subjection. To acknowledge them as equals would have destroyed their own pedestals. They have opposed an even partially woman-governed world, fearing a limitation of their own undisputed freedom. Men have insisted not only that we live in a man-governed world but that we worship in a man-dominated church, and we can no longer accept this.

We are going to make the necessary changes, but not for the sake of women alone. I have no nearsighted idea that what is done for women and children is not to the advantage col men also. In short, we are not working against men, for women, when we speak of women as dictators; we are working for the human race.

The day is not far off when the Woman’s Party, of which I am president, will be strong enough to impose any measure it may choose.

Our first task is an educational one. We mean to plant the idea of independence in the mind of every woman. Our party will be a woman’s party, and a woman’s party only. It will have no members, no officers, no employees who are not women. I have no intention of repeating the experience of the American Red Cross, which, in spite of the fact that it was founded by a woman, is run entirely by men. Every big, high-salaried position in the organization is now filled by some man. It will never be possible for that to happen in the Woman’s Party. There is a clause in the deed of gift of the property in Washington-the property on which the new parliament building will be erected-which provides that it reverts to my estate the moment any man is given official position, employment or salary.

We will never get a balance of power except through rigid rules like these. The world makes its readjustments by swinging to extremes.

BY THE way our membership is increasing, it is evident that our organization will be a colossal thing in a very short time. We know the gigantic proportions of our task, and we are not afraid of it. We mean to free women from the indignity of hanging on to the old political parties.

Personally, I think it would be far better for women to stay out of all parties and away from all elections, if they can find no other medium of expression than the existing decrepit man-dominated parties.

The strength of man has always been in the union of men, and the weakness of woman in her lack of union. It is necessary to make women realize that until they have achieved some sort of solidarity they will never be able to impose their will upon the state. 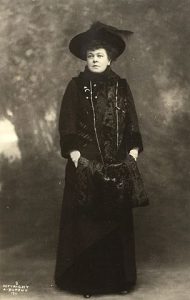 Men have always tried to isolate women, to keep them as creatures apart. Men have always put women in houses, shut them away behind walls, kept them for themselves, detained them apart from the community. Men used to put women in a harem; now they put them in a home. But the home, like the harem, has considered its own interests rather than the interests of the community, and in so doing it has jeopardized its well-being instead of fostering it. The home, like the individual, is insufficient when it stands alone.

If a man commits an indiscretion all other men protect him. If a woman is at fault other women, instead of protecting her, are often the first to condemn. Women in the past have been afraid to lose the respect or the admiration or the love of men by opposing their wishes. In the last few years, the suffragists have demonstrated that women do not lose the admiration of the worthwhile men by expressing their own individualities. On the contrary, it has been my experience that the modern man finds the intelligent, socially conscious, individualistic woman a more companionable person than her frightened sister who fears to speak or move lest she offends him. Women gain far more than they lose by an attitude of independence.

In my own experience, I have seen a tremendous evolution in a very short time. Take the question of divorce. It is not long since no woman dared to openly criticize a man’s behavior by demanding a divorce from him. Men have learned that they have to accept our criticism of them.

I was one of the first women in America to dare to get a divorce from an influential man. Up to that time divorce had been the prerogative solely of actresses. Rich men could marry women, treat them in any way they chose, and ignore them. That is no longer possible. I have gone down the aisle of the church when women I had known since childhood drew back in their pews and refused to speak to me. I have been the guest at parties where the hostess was the only woman in the room who talked to me. Why? Because I had dared to criticize openly an influential man’s behavior. That is all changed. There is hardly an influential family in most of the states whose women have not deemed it wise to divorce their husbands.

We have said to men: “You can’t take us and use us as you choose, throw us aside and expect us to submit without a protest. We have a right to live, a right to be respected.”

Someone must pay the price in criticism, even in ostracism, for every advance which the world makes.

The blazing of the trail by the pioneer is never an easy task. I have been put out of the fold so many times and taken back so many times that I have ceased to attach any importance to it. Today the world holds up its hands in horror over something which tomorrow it will have to accept as an established fact. Divorce was the cause of my first ostracism, then suffrage. When suffrage became respectable I was received back into the fold again. When suffrage divided itself into militant and non-militant groups, I, as a militant, was again in disfavor. These things don’t matter. They are part of the development of the individual woman and, through her, of the development of womankind as a whole, and ultimately of the human race.

Men must cease to dictate everywhere: in the judiciary, in the Senate, and even in the White House. I do not urge now that a woman be made President of the United States. It does not seem to me to make much difference if a woman is President or not. But if the right woman came forward-someone better fitted to head the government than any available man-I should say: “Make her President regardless of sex.” I certainly think we have in this country, even now, women more fit to fill the Presidency of the United States than the last few men who have filled it. But that is all a question for the future. At the moment it is unimportant. The important thing is to break down the barriers which prevent women from utilizing, for the good of the human race, all their energies, capabilities and talents.

If we are going to repeat the experience of men in politics we would do better to stay out. If we are going to scramble for jobs, instead of fighting for principles, I think it would be much better if we did not have a vote.

Alva Belmont was a wealthy socialite who used her fortune to advance the women’s rights movement of the early 1900s.

She was born on January 17, 1853, in Mobile, Alabama. She was educated in France, and settled in New York City where she married William K. Vanderbilt. Her second husband was Oliver Hazard Perry Belmont and after his death in 1908, Belmont devoted herself and her fortune to the struggle for women’s suffrage and rights. She died on January 26, 1933, in Paris, France.