The examinations of the Life Extension Institute show only one man in a hundred wholly free from disease and physically fit.

What’s the Matter with Us?

The American stock is depreciating, physically. mentally, and morally.

Heart disease kills three times as many as forty years ago.

Bright’s disease is increasing at the same rate.

Eminent medical authorities tell us that every tenth man in the United States has been infected with syphilis.

The Commission on Conservation of Canada reports that one in every seven or eight persons received into the Toronto General Hospital has syphilis.

Syphilis is becoming a greater menace than tuberculosis. It is the plague of plagues.

It does not destroy its victim at once but kills him by slow torture.

A syphilitic father breeds syphilitic children and so blights his progeny.

What Are the Causes of Our Increasing Physical and Moral Decline?

The causes are many. Among the most potent and direct are:

The Saloon, the Brothel, and the Cigarette. 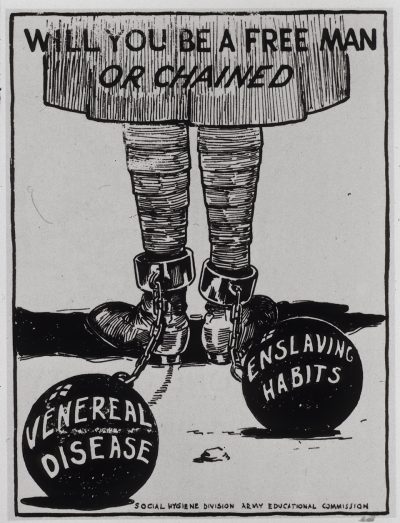 Will You Be a Free Man or Chained?

These three evils are the greatest causes of our growing national inefficiency and unpreparedness.

The emergencies of war have compelled us to make a self-examination.

Our horrible condition is laid bare. What are we going to do about it?

We must declare war upon our enemies at home as well as those abroad.

The saloon is passing; John Barleycorn is dying. But we haven’t begun to fight the brothel, and we are encouraging the deadly cigarette.

Every State has laws requiring the reporting, isolation, and quarantine of all infectious diseases. The law is enforced with every disease except syphilis and gonorrhea.

The statutes of every State make the brothel an illegal institution and a public nuisance. The law is nowhere administered efficiently.

The cigarette is known to be an enemy of scholarship, of culture, of morals, of health and vigor, and yet it is tolerated, even encouraged.

The millions of cigarettes now being fired at our soldiers will every one hit its mark and will do its mischief. More American soldiers will be damaged by the cigarette than by German bullets.

The public must be aroused to demand the suppression of the brothel.

Men and women infected with syphilis and gonorrhea must be put in quarantine the same as smallpox patients.

The Commission on Conservation of Canada has demanded drastic legislation requiring the quarantining of subjects of venereal diseases. The French Government has already put this plan in operation. Why should we wait until syphilization becomes synonymous with civilization before we adopt the only possible efficient measure of defense?

A campaign must be waged against the cigarette, the pipe, and the cigar until tobacco is buried in the same grave with Barleycorn.

We must begin a great campaign for biologic living.

The world needs a new gospel, a new religion. Not a substitute for any creed, but a supplement to all creeds-

The gospel of health. the religion of the body, of right living, biologic, scientific living.

The religion of being good to yourself.