During the last twenty years a large number of soft drinks containing cafein and smaller or greater quantities of coca leaf and kola nut products have been placed upon the market. Preparations of this class… are now known to be an impending evil.

It is believed to some extent at present that the use of cocain taken internally produces a sense of exhilaration, and the amount of muscular and mental power appears to be temporarily increased. Cocain is one of the most insidious and dangerous habit-forming drugs at present known. Many lives have been wrecked and many crimes, have been committed as a result of its use, and strenuous efforts are being made to curtail its employment.

It is well known that parents, as a rule, withhold tea and coffee from their children, but having no knowledge of the presence of cocain, caffein, or other deleterious agents in soft drinks, they unwittingly permit their children to be harmed by their use. 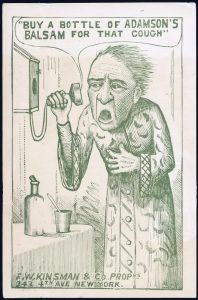 Colds and coughs are among the most common ailments of childhood and youth, and many special mixtures have been devised and placed on the market for treating them. These concoctions usually contain one or more habit-forming drugs, as is clearly shown by the following examples:

The same habit-forming agents are offered to the public in the form of confections under such names as cough lozenges and pastilles; examples:

All of them are ineffective, and some contain cocain in one form or another, which at once indicates the purpose of the promoter of the remedy. Instead of eradicating what is commonly believed to be a comparatively harmless habit, there is grave danger of fastening a pernicious drug habit upon the user. Examples of preparations of this character recently examined and found to contain cocain and cocain derivatives are Coca Bola, Tobacco Bullets, and Wonder Workers. The Coca Bola is marketed by Dr. Charles L. Mitchell, of Philadelphia, and the Tobacco Bullets by the Victor Remedy Company, now the Blackburn Remedy Company, of Dayton, Ohio, while the Wonder Workers were promoted by George S. Beck, of Springfield, Ohio.

There are various remedies on the market used from infancy to old age containing habit-forming agents which can be purchased almost ad libitum by anyone. Many of the mixtures are concocted, directly or indirectly, through the aid of unscrupulous physicians. Some illicit sales of coçain, morphin, etc., are also made by druggists, both wholesale and retail.