Heroines in the Farm Front in 1944 (A USDA Radio Script) 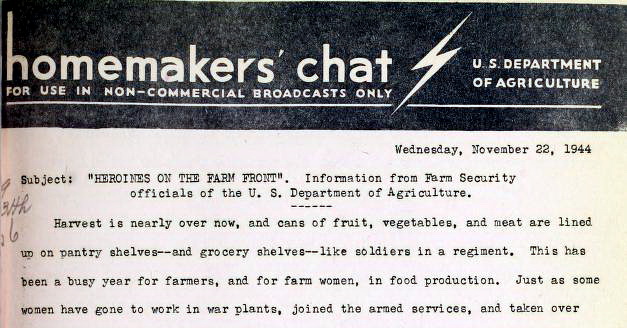 Harvest is nearly over now, and cans of fruit, vegetables, and meat are lined up on pantry shelves — and grocery shelves — like soldiers in a regiment. This has been a busy year for farmers, and for farm women, in food production. Just as some women have gone to work in war plants, joined the armed services, and taken over men’s jobs in cities, so others have gone to work on farms to help produce food. Quietly and without fanfare, they have taken their place beside husbands, sons, and brothers in the fields and farm yards; and some have run farms alone.

Today we hear about some women in Farm Security borrower families, who have helped fill our pantry shelves and grocery shelves. They represent thousands of others throughout the country who have worked in similar ways to hasten victory.

First we might mention Mrs. Monnie Strother of Independence County, Arkansas, who was just 34 when her husband died two years ago and left her with 7 small children. Mrs. Strother knew nothing about farming, yet realized that she couldn’t keep her family together unless she made a living for them at home. She talked over things with the two oldest children – 15-year-old Nellie Mae and 13-year-old Robert – and with her FSA county supervisor. Result was that she was able to put her 120-acre place in full production last year and this year. She and the childrt planted, cultivated, and harvested crops, and now they not only feed themselves but sell fresh vegetables, dairy products, poultry, eggs, and pork on the war food market.

Near Farmington, Missouri, Mrs. Roy Berghaus is “head man” of a highly successful 125-acre dairy farm. Her “handy men” and field hands are her four small daughters ranging in age from 3 to 9 years. When Mrs. Berghaus’ husband joined the Navy Seabees in 1942, she took over the farm to keep it operating while he was away. She “bought a lady’s model tractor and other light farming equipment, and was soon handling them like a professional. She now sells milk, cream, and butter and also fat hogs – to add to city folks’ meat supplies.

In Crook County, Wyoming, tiro elderly sisters contribute “beef to the Nation’s meat store by raising purebred cattle on a 700-acre ranch. The women are Mrs. Naomi Dungey, 65-year-old widow, and her sister, Miss Catherine Bennett, aged 60. The sisters were born in England and lived on a farm where their father raised purebred cattle and hogs. Besides beef cattle, the women sell dairy products from 17 head of dairy cows and fatten hogs for market. They did such a fine job of food production this year, in fact, that they were awarded a $100 prize for outstanding agricultural achievement.

Two other sisters – only in their early 20’s – who are receiving praise for farm work this year are Ella and Leona Bryant of Delta County, Michigan. When Mr. Bryant died, and the girls’ two brothers joined the armed services, they took over a 35-acre farm and have been making it produce for market ever since. Although they hire no help, they milk 18 cows a day, feed several dozen hogs, raise poultry, cultivate a large garden, and handle 50 head of livestock for their landlord.

Another “man-less” farm that has turned out tons of food this year is that of Mrs. Dulcinea Curtis in Sandoval County, New Mexico. This year, Mrs. Curtis, mother of two small daughters, used a tractor to grow her own alfalfa, chili, corn, and truck crops. She even pruned and irrigated her own fruit trees and, in addition, hauled much of her produce to market.

While not running a farm alone, a couple of Florida women say they are “leading double lives” these days as they work beside their husbands on the farm. Mrs. John Archibald of Sumter County keeps house, and also works outside branding cattle, “riding the woods” for cows twice a week, feeding fattening hogs, and often marketing livestock. Mrs. Charles Blaha of Hernando County takes her soldier son’s place on their large poultry farm, and also runs a small highway restaurant part time for war workers.

For sheer courage and perseverance, Mrs. Nancy Fields of Mayes County, Oklahoma deserves recognition for accomplishment in the face of difficulty. Mrs. Fields is a widow with 5 children, and has known crop failure, sickness, and death in the past two years. At Christmas in 1942, her husband was killed in an automobile accident. She was left with an invalid daughter confined to a wheel chair, a son about to be drafted, and a farm with a mortgage on it. Fortunately her son was deferred awhile to put in crops. But unfortunately later, floods wiped out the crops and garden and almost destroyed the home. The crops were replanted, only to be ruined by drought. Still, livestock and poultry were left, so Mrs. Fields put several tons of pork, beef, poultry, and dairy products on the market. This year, instead of giving up, she hiked her production goals and planned to raise more livestock and more field crops. And when her eldest son, and a younger boy just turned 13, went to the army this summer she only redoubled her efforts and worked all the harder with the other children at home.