“It Shouldn’t!” Exclaims One Boston Woman, Who Uses Her Husband’s Name Only When She Pleases—But Another Says There Are Good and Sufficient Reasons

“The matter is closed and will not be reopened,” officially replied the Assistant Secretary of the Interior last week when some Washington women protested to him that although they are married they want to keep their unmarried names. Officially it may be settled; women department workers may be obliged to sign their married names in order to get their pay checks; but the larger question of whether a woman should take a new name when she takes a husband will not be settled as long as the little band of Lucy Stoners keep up the agitation for married women with maiden names. They are an advance guard, as determined pioneers as the first suffrage workers.

In today’s Globe, Katharine Morey of Brookline, who is sometimes known as Mrs. Herbert Pinkham, tells why she thinks it absurd to expect a woman to give up the name she has been known by all her single life. 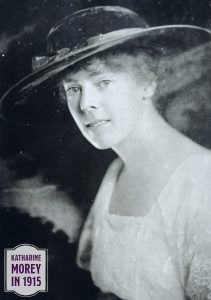 This appeared in The Boston Globe on September 21, 1924.  The portion supporting women keeping their names after marriage was written by Katherine A. Morey (also known, sometimes, at Mrs. Herbert Pinkham).

Morey: No woman who has seriously decided to keep her own name will be more than mildly interested In the semiofficial news that married women employees of a certain Government department a t Washington must sign their “married names” to the payroll. There is no law In the land compelling a woman to take her husband’s name. and-as far as I have been able to discover there are no legal obstacle’ to retaining the so called maiden name in all circumstances.

That any department at Washington, or any number of departments, actually hoped to impede the movement toward name independence would be strange news. Such tactics would be several years behind the times. The idea is already firmly established and the practice of it is growing every day. I doubt very much if all the conservative talent in Washington could withhold the pay envelope of a woman who, accustomed to use her own name. refused to sign her husband’s name on a payroll. END_OF_DOCUMENT_TOKEN_TO_BE_REPLACED