A Woman Living Here Has Registered to Vote

This sign from 1920 was designed to be placed in the window of a home so that all who passed would know that the woman within had exercised her right under the 19th amendment and registered to vote. It also served as a reminder to other women to do the same.

I have cleaned it up and made a nicely printable version that will fit on a standard (US) Letter size page. 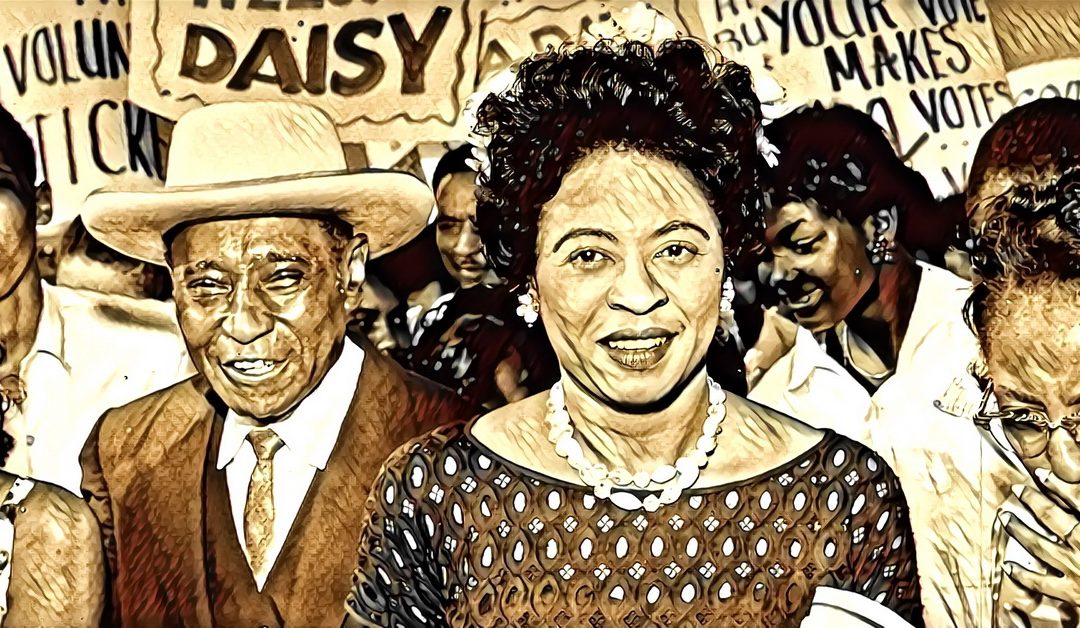 What Happened to Daisy Bates?

School desegregation is a fact in Little Rock and – because of Little Rock – in many other Southern cities, but Daisy Bates, who played a key role in making it all possible, is forgotten by the public.

(Negro Digest/May 1962) She was the unlikeliest of heroes. There she was, young and comely, as trim and chic as a model in a magazine advertisement. At the most prosaic, it was easy to picture her as a youthful matron, dainty and decorative, waiting in her well-appointed home for the man who adored her to come in from his labors.

When the Little Rock crisis reached fever pitch in the fall of 1957 and people across the world were wondering about the woman called Daisy Bates, writers were turning out reams of copy in an effort to describe her. In her native Arkansas, of course, she was pictured as a fire-breathing, Red-lining witch and called every vile name printable and a few names which, in a truly civilized society, are not printable at all.

But other writers were more objective. Seeking to satisfy the curiosity about the woman who had turned the nation upside down, a United Press correspondent described Daisy Bates as “a businesslike woman of 35” and went on in a kind of awe to list the measurements Of her slim figure. “She wears her black hair in a casual bob, sometimes covering part of her forehead,” he wrote, adding: “Newsmen find little trouble talking to her.”

For readers of the Minneapolis Tribune, the famed Negro journalist Carl T. Rowan was more to the point: “Actually, she is a typical Negro housewife—different from the average American woman, perhaps, primarily in that she prefers poker to bridge and has become expert with a rifle.”

Inherent in Rowan’s description is the suggestion that, had the wanton finger of Fate pointed at many another Negro woman, the results would have been pretty much the same. There is nothing in this suggestion to detract from the extraordinary achievement of Daisy Lee Bates. Rather, there is something in it of commendation for all the millions of Negro women who have borne with uncommon fortitude the burden of their culture’s cruelty and of their men’s helpless despair.

If Daisy Bates is typical of her kind, then she proved a splendid example. Never once in her long and barbarous ordeal was there a public moment of faltering or re- treat. If there had not been private ones, then she would have been more than human, and Daisy Bates is very human indeed.

END_OF_DOCUMENT_TOKEN_TO_BE_REPLACED

The Day Book was an experimental, advertising-free daily newspaper published in Chicago from 1911 to 1917. It was owned by E. W. Scripps as part of the Scripps-McRae League of Newspapers (later Scripps-Howard Newspapers).

With the Day Book, Scripps sought to eliminate the often adversarial relationship between his editorial staffs and the advertisers that sustained them. To his disappointment, pressure from the business community had at times forced the Cincinnati Post to temper its firebrand campaigns against bossism and cronyism. The Day Book began publishing on September 28, 1911. Like his other penny presses, the Day Book championed labor rights while delivering a mix of politics and lowbrow, sensational content.

Just how rotten a stunt the police can pull on a young fellow, or on anybody was queried in the boys ‘court this morning when Judge Fisher balled some coppers out and turned Walter Allan, 5345 Blackstone Ave., out in the open air after three days in the lock-up.

Allan was grabbed Dec. 3 that’s way last Friday by Officers, McGuire, Higgins, Tapscott, as they were signed on the booking sheet, because he happened to look like one of the boys who were throwing stones in the neighborhood of 1505 B. 63rd St. way last October.

The boy was taken to jail and not booked until this morning. He was held three days, under no booking, but just because he happened to look like one of the stone throwers. This morning he was booked for breaking a window and brought into the boys’ court

And then Judge Fisher took a hand. He celebrated his first day on the boy’s court bench by taking a
good hard, and direct, wallop at the methods of the police.

“If such a case as this comes into this court again while I am here I will send for the officers and the captain of the district -to explain things,” Fisher said.

“The whole affair is an outrage. It’s rank police methods. The idea of holding a boy, or anybody else, in jail for three days without even booking him!”

Fisher then advised the boy to sue the city and the officers and turned him loose.

B. Simon, store owner, who had complained of the stone throwing, absolutely failed to identify Allan as one of the boys.

A few weeks later The Day Book provided this update to Judge Fisher’s activity on the bench.